Highlight of the year: bison 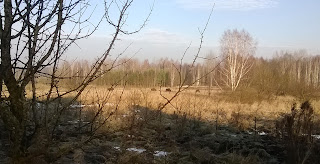 I'm just recently back from a short trip to Poland. I spoke at a conference about paper and forest products and then took some time to visit one of Europe's wildest forests in Bialowiesza. It was strange to be in forest in such a flat landscape - most of Europe's lowland forests have been destroyed and converted to farmland. But Bialowiesza was spared, as one of the Tsar's favourite hunting places.

Although all of its bears have been hunted out, there are still wolves and lynx. Most excitingly, it is also home to European bison, which were extinct in the wild last century, but some remained in zoos and they
were successfully reintroduced to the wild. On our third morning there, we sighted two of these giants - Europe's biggest mammals. On our fourth morning, on the edge of the forest, we spent a happy couple of hours with four peaceful creatures (sorry, photo technology is not co-operating today). They knew we were there, and it was a great feeling of camaderie when the biggest bull clearly decided we were no threat, and sat down to chew the cud.

Somewhere out in the forest was also Europe's smallest mammal, the pygmy shrew, but it eluded us!