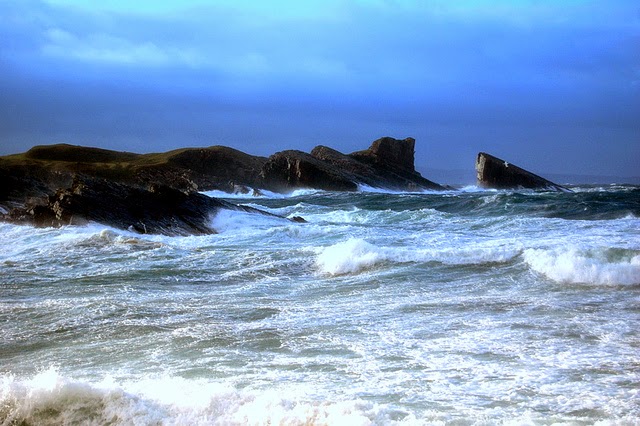 My next novel is set in the Iron Age, and quite a lot of it happens in Assynt, centering around the broch. Recently I've been trying to write a section that involves a ceremony on Split Rock (pictured) and today, I needed to go there to check out exactly where various actions might have taken place. It's a hard life, being a novelist :-)

There is some debate about whether this split rock or a nearby blow hole is where Clachtoll gets its name from (Clach is rock in Gaelic, and toll is an anglicisattion of tuill, hole). It is spectacular geology, right on the edge of the three billion year old gneiss and the one million year old sandstone, which is tilted at a dramatic 30 degree angle, causing the distinctive slope of the rock.

Up on the highest pinacle, which is seriously exposed on a windy day like today, there is vitrified stone, which has burned to melting point and then resolidified. This was probably done in the Iron Age and it is therefore going in my novel!

There is no agreement at all about what may have caused the fire. Was it done to make fortification of some sort? There are similar vitrified stones in other locations that are interpreted as forts. Or was it a beacon? Or a pyre? It's unlikely that the debate will be resolved one way or the other any time soon, , so I feel at liberty to make it up. That's the beauty of historical fiction: you can go as far as you can on the basis of the archaeological or historical data and when that runs out, imagination can kick in.

We know from many sites around the coast that there was a lot of interest during the Iron Age in the liminal (edge) zone of the shore and of other liminal zones, like caves marking the boundary between our world and the underworld. There are few more dramatic edge-zones than the craggy shore of Assynt, and I feel sure some pretty spectacular events must have happened out on the split rock in years gone by.
Posted by cybercrofter