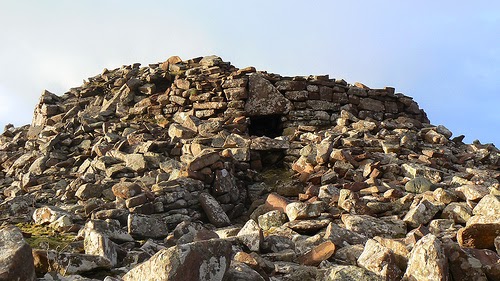 When Pytheas travelled up the west coast of Britain, around 320 years BC, he must have visited the local people. What kind of buildings were they living in? In particular, when he came to Assynt, (which I assume he did, as I have blogged about before), had the broch at Clachtoll been built?

This is not just an idle question. The historical novel I am writing needs settings that are plausible. I am making all the people up, except Pytheas, but I want their environment, the objects they use, their livestyles and even their beliefs to be based on sound archaeological evidence. When Pytheas arrived here in Assynt, he for certain was not offered a cup of tea in a crofthouse. He may have been offered some mead in a ceramic cup with a thumb print, given a dinner of bannocks and fish and then offered a bed for the night. But did that all happen in a roundhouse a few feet high, or did he dine and sleep in a double-walled, round, cooling-tower shaped broch, possibly 14 metres tall?

I confess to desperately hoping Pytheas stayed in the broch. This is not without grounds. When some conservation work was carried out on the broch in 2011, we discovered that the broch had collapsed, pretty suddenly, probably involving fire, and carbon dating of charcoal remains of an interior wattle floor revealed that this collapse happened sometime between 153 BC and 55 AD (see the dig diary posts from that excavation for more information). If the earlier date is correct, and the broch fell out of use in the second century BC, it is entirely plausible that it was already standing a century and a half earlier. Similar buildings in the outer hebrides have been dated to between 500 BC and  0 BC (See the Archaeology Hebrides site for more information).

Next year, there could well be a full excavation of Clachtoll broch's interior. Because it collapsed so early and as far as we can tell has not been tampered with since, we expect that under the 1500 or so tonnes of rubble inside, there will be unique assemblages of material dating back to Iron Age. This will give us evidence of the people who lived in the broch. It may well also reveal how and when it was built. Meanwhile I write my novel, and I try to make an informed guess. It'll be just my luck if I'm proved wrong by the archaeologists sometime in 2017!

Whether the excavation happens is at the whim of grant funders. If it does, there is still time to influence what exactly will happen at Clachtoll broch after the archaeologists have emptied the interior of rubble and explored the floor. Previous ideas included creation of a metal structure indicating how tall it may have been when it was standing. But this idea has been thrown out, and the archaeology team have gone back to the drawing board. Their new plans include providing access between the two walls of the broch. There is an opportunity to hear more and give feedback on the latest ideas on Monday 9 March 2015, at 7.30 in Stoer Hall.
Posted by cybercrofter