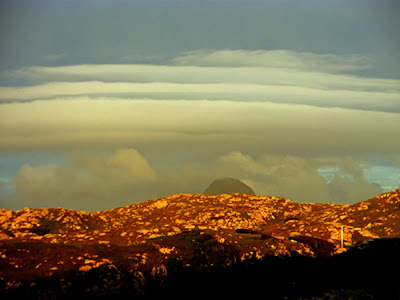 These weird clouds appeared over the summit of Suilven on Monday 27 June at sunset.
Posted by cybercrofter 2 comments:

I recently read a crime novel, The Sea Detective, by Mark Douglas-Home, and it has set me pondering about shame. There are three crimes in the book, all deeply shameful, and one of the plausible things about the book is the way these are portrayed as generating deceitful behaviour on the part of their perpetrators and other people in some way implicated, including people who knew, but turned a blind eye. As time passes, their shame leads not only to hiding of the truth but also to self-deception.

I wonder if this is generally the case. Does shame always lead people to hide (from) the truth, and to lie, even to themselves?

If so, this draws into question one of the most common strategies of environmental and human rights campaigners - to 'name and shame' the perpetrators of wrong-doing, in the hope that this will drive them towards better behaviour. But if shame leads people to self-deception, then this strategy is bound to fail.

I think in particular about the climate change campaigns, which have set out to shame all of us jet-setters, drivers of gas-guzzling cars and general wasters for our enormous carbon footprints. But if shame leads to deceit, rather than guiding us to better behaviour, the result of this campaign will be wide-spread denial. Which we see.

I think of some of the campaigning I have done concerning the paper industry, and some of the defensive, under-the-carpet responses to well-documented finger-pointing exercises. It now seems obvious to me what was going on: we made our target companies feel ashamed and they reacted accordingly.

I think about educational situations, and why it is that we learn from some mistakes, but only if they are not pointed out to us in ways that make us feel ashamed for them. If we feel shame, we duck down and hide, and that dishonesty prevents us learning.

Maybe it seems obvious to you - but it took a good bit of detective fiction to help me see the importance of shame, what a powerful role it plays in our society and how much of a barrier it is to honesty. The accidental or deliberate causing of shame is, I now believe, a fundamental flaw in many campaign strategies aiming to change behaviour.
Posted by cybercrofter 2 comments:

I spent Wednesday this week in Edinburgh at the launch of a campaign for huts - see the very lively facebook debate. This is a Reforesting Scotland campaign to generate enthusiasm for huts, particularly in woods, in Scotland. Some people want somewhere quiet, rustic, simple and affordable to retreat to from urban life for weekends and holidays. Some want a full-time life away from the rat-race. They all want huts. A thousand huts. Or more.

I was invited on Wednesday to speak about what it is like to live in the woods, in huts (sheds and caravans and upturned boats) which I've been doing happily for 12 years. Happily being the operative word. I used to be a moody, temperamental urban-dweller with a job, mortgage and most of the other trappings of urban life. Since I got out of the box and into the woods, I am much happier. I live a simpler life without a proper job, mains electricity or a flush toilet. I am less secure and much freer. I am constantly exposed to nature and the other species with whom I share this place. I am aware of the weather, the phase of the moon and tides. I am alert and responsive to the rhythms of the changing seasons. I am more alive. Hut life has made me happy.

As well as being good for me, living in the woods has also been good for the woods. Trees flourish around us and the woods are regenerating, thanks to the disturbance we cause to deer, the nuts and seeds we sow and the compost we create. This is in marked contrast to the effect of the clearance of people from most of rural Scotland over the past two centuries, which has resulted in monocultural industrial landscapes of Sitka spruce trees or wet deserts grazed and eroded by sheep and deer. Anyone coming to a crofting area cannot fail to see that where people were allowed to stay (here it is around the coast), there is a diverse mosaic of woodlands and species-rich gardens, fields and pastures, whereas where the people were cleared for sheep ranches and sporting estates the woods have died on their feet through overgrazing and burning. This is, I believe, a reversible process, but only by letting people back onto the land.

We need some radical ways to give thousands of people access to land in Scotland. The Scottish Crofting Federation has called on the new SNP government to create ten thousand new crofts and bring a quarter of Scottish land into crofting tenure. This is a great vision. Many of these could be woodland crofts, particularly as the nation's biggest land holding is the national forest estate. If we can combine a move to create access to pieces of land, with a permissive approach to how people build on them, we could be onto something good.

There is quite rightly a national obsession with the shortage of affordable housing. One of the most obvious solutions is to allow people to build their own, cheap, simple dwellings, in other words, to encourage huts. This is a challenge to the current planning and building standards regime, but surely not insurmountable. My suggestion would be that local authorities could create zones where there is a derogation on planning and building standards, and let's see what happens for a while there. If we can create a situation where lots of people can get access to rural land and build huts, we will, I am sure, create a situation where rural economies and biodiversity will flourish.

It's normal in places like Scandinavia, Russia, Germany and Canada, for people to have a wee, rustic place in the forest, and in Scotland there used to be a much stronger tradition of hutting. Unfortunately very few people nowadays have livelihoods that involve seasonal hut-dwelling - the herders and charcoal makers are long gone - and most of the informal hut sites where people from the central belt could go for a cheap country holiday have been emptied of their residents. The Barry Downs hutters are the most recent to lose their fight against eviction. It's time to reverse that trend.

The Carbeth hutters have, after a 14 year rent strike, embarked on the process of buying out their land, and good luck to them in raising the money. Gerry Loose, one of the Carbeth hutters and an inspirational writer, was also speaking at the event on Wednesday. He posted this great quote from Frank Fraser Darling, from about 1933, on the Facebook site and it's worth repeating:

“It is remarkable how much more work is made as soon as you have a house of stone and lime with doorsteps and fireplaces and several windows, and when you have begun to collect furniture. We have reached the conclusion that the cure for the chronic state of monetary poverty in which we find ourselves while we insist on doing research which it pleases us to do . . . is to simplify needs. Face up to the fact that much of the furniture and fittings, and therefore of indoor space, is quite unnecessary for comfort. Pare down continuously and avoid junk like the plague: be careful to see that such labour-saving devices as you install are not in fact labour-makers. We have never been more happy than in these wooden-hut days . . ."

I second that emotion.
Posted by cybercrofter 2 comments:

Last night I went to see a play - and I was working. The review is already up on Northings, here, by one of those miracles of ezine-publishing. Increasingly I seem to be going to arts events with my reviewer hat on. I wondered if it would reduce my enjoyment of such events, but I'm reaching the conclusion that mostly, it enhances the experience. Because I know I am going to have to communicate about it afterwards, I really pay attention, and as a result I think I notice a broader range of what is happening. I am tuned to think about how the art is being presented. To put it bluntly, I make more of an effort. Instead of waiting for it to wash over me, I go to it, I reach into the performance and tug what I can from it. And, surprise, surprise, I'm getting more out of these experiences than I used to.

I review as a lay person who can write. I am not a professional theatre person. I am certainly not a visual artist, yet I've reviewed a few art exhibitions recently (for example, here and here) and found it deeply rewarding. Having to respond in words to a wordless artform is a challenge, and it's enriching. (It needs to be, it's not exactly well-paid!)

Reviewing books is, of course, a bit closer to home territory. Here I am quite conscious that I would like to do unto others as I'd like people to do to me. I know what it feels like to have a reviewer fail to understand the text I have slaved over for years. I consider it my duty to look for what is admirable, what is there to be appreciated, what the writer does best.

The bottom line is that I love getting involved in conversations about the arts and I revel in having the opportunity to enthuse, in public, about the pleasure I have found in an exhibition or a book or an event. I guess that makes me a rubbish critic. Tough. I don't want to be negative reviewer. I'll point out a weakness if I think it stands out and I'll question something if it really furrows my brow. But on the whole, I am more interested in appreciative enquiry than criticism. I have no time for slagging things off. If something is so awful there's nothing good to say, I won't review it. I won't waste my time, or yours.
Posted by cybercrofter 4 comments: