In the interests of simplicity, from now on I shall be blogging on my website: http://mandyhaggith.worldforests.org/blog.asp

See you there!
Posted by cybercrofter No comments: 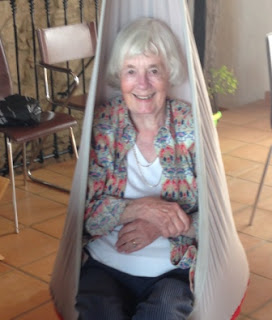 My Mum died last week. I've never been sadder. These poems are for her funeral. The first I wrote after Mum took me to Ilkley, in Yorkshire, where she grew up, to show me around her memory lanes. The second I have just written and the third is the title poem from my first poetry collection.

from your childhood bedroom in the house
you say seems small
although to me it’s four storeys tall
and full of tales you must recall.

Here’s the graveyard where you walked your dog,
stone backstreets where you used to play,
the path you took beside the River Wharfe.

It's the Big House that seems diminutive,
front door blocked up, stables gone, no garage for the Rolls
in which your father wooed the cook, your mum,
as they shopped for the rich man’s dining hall.

You gesture to the meadow filled with daffodils -
now flats. No bulbs
survived the brick new builds.

You do not cry at all
not even though the role of honour's gone,
from Ilkley Grammar School
your name, head girl, no longer on the wall.

After your father came back from war
you set off for the family’s first degree.
So now I think I see what you saw
up the attic stair and through the door,
out onto the open moor.

From Mum I learned what’s good in life and what’s wrong
Though I was the wicked little one.
From Mum I learned all the flowers and trees
how to read and write, fight for what’s right,
to seize the day, to plug away.

From Mum I learned to love a man through everything
and though we love as well
few of us will love so long.
And now from Mum I’ve learned to die,
and when it comes,
I hope I’ll be so calm, so brave, so strong.