The croft - shed and polytunnel

Here's another shot of another key corner of our exploded abode - winter headquarters ('the great hall') on one side, bath shed (formerly known as 'the lounge', as it used to house a sofabed as well as the bath, so one could lounge, wet or dry...) on the other. In between them, the polytunnel. 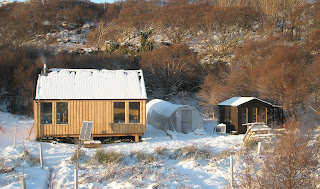 What did we ever do without the polytunnel? Quite apart from salad production all year round, getting plants started in spring, tomatoes in summer etc, at this time of year it's a vital dry store of wood with chopping block for kindling production, and I store my willow in it for basket making, make felt in it, in fact I do everything vaguely messy in it, especially on wet days.
Posted by cybercrofter 2 comments:

Continuing with a picture of the croft, for those of you curious about our 'exploded house' of scattered sheds. This is the industrious corner, with our studio (designed and built by Bernard Planterose of Northwoods on Loch Broom) and the shed behind it, which used to be our office until we built the studio, and which goes by the somewhat grandiose name of 'the library' (yes, it is full of books). 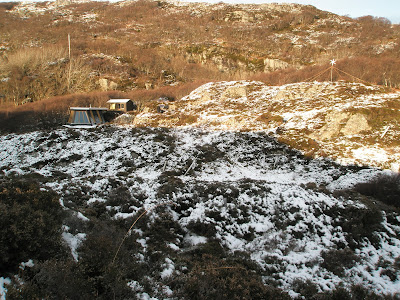 On the right of the picture you can see the power supply. We also have a solar panel, about which I cannot speak warmly enough. Heating is by wood, and sunshine.

There, now you know where I'm sending this stuff from.
Posted by cybercrofter 5 comments: 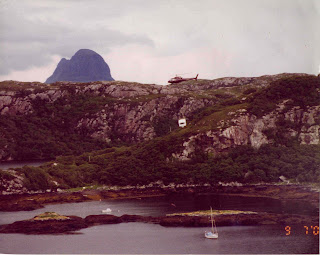 One of the amusing things, ever since, has been watching people who come to visit scratching their heads beside the caravan, and eventually saying, 'How on earth did you get this here?'
Posted by cybercrofter 2 comments:

It has started to dawn on me, as I spend several hours each afternoon and evening tweeting about trees, that twitter is a new form of an old thing.

As part of the A-B-Tree project,  at dusk each day I'm creating what several folk have now described as a 'forest of tweets' about a tree - one tree per day, taking them in alphabetical order, according to the Gaelic tree alphabet. Today it was oak. Yesterday it was hawthorn. Tomorrow it will be holly.

I normally begin with nomenclature and botanical facts, move onto practical uses and then gravitate to snippets of folklore. I throw in links to poems from time to time, and most days I have finished with a poem.

I'm enjoying this process, although it feels a bit strange to be sitting in my shed in the dark, throwing out titbits into cyberspace to see if anything bites. But increasingly, it seems, people nibble.

The poet, former librarian of the Botanic Gardens, Colin Will (@colindwill) is hugely knowledgeable about trees and chips in most days with fascinating gems. Environmental archaeologist specialising in trees, Coralie Mills (@dendrochronicle) has shared knowledge too. I'm delighted when people ask me for sources or for clarification, or start to speculate what something might be about. It's great when people pick up on something and retweet it to their followers because they think it's interesting, or weird.

I've been corrected about several points, which is fab. For example cricket stumps are unlikely in ancient times to represent the Triple Goddess because there were only two of them until 1775, though isn't it interesting that they're called wickets (echoes of wicker and wicca...)

Then there are the jokes - and I love the banter around some of the stranger magic spells I've put up, or the just plain silly responses. I'm being heckled! Go cybercrofter!!

But most pleasing is the realisation that a lot of the stories and traditions, taboos and warnings, rhymes and spells, go right back to the oral tradition of storytelling and the bardic culture. Although this project started out as all about writing, the content of much of this stuff predates written communication and was passed on around firesides, in songs and tales. And twitter is a bit like a giant, global fireside at a giant global crofthouse, where people can drop in, listen for a bit, throw in an idea, nod or laugh or take the piss, and wander out again. I like that.

Tomorrow at dusk, thig a-steach (come away in), pull up a stool and we'll give holly a chewing over @cybercrofter. Slainte!
Posted by cybercrofter 2 comments: 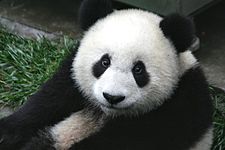 We can, and should, watch pandas on video, in the wild, not in some latter day circus on Corstorphine Hill.
Posted by cybercrofter 5 comments:

I have now completed 18 creative writing events, one for each tree associated with a letter of the Gaelic alphabet. The last one was willow, at Timespan Museum in Helmsdale, and as it was disgusting weather we stayed indoors - restricting our experience of the tree to some twigs I had brought, and some baskets. But the participants seemed to enjoy themselves nonetheless, and we had a fascinating discussion about the folklore of willow, including some pretty weird ritual practices associated with it - good for a laugh. 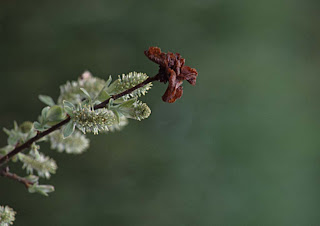 So that's phase 1 of the project complete, and now I'm getting under way with phase 2, which is to gather all of the information I have collected about the trees and write it up. Quite what form that writing will take is still pretty fluid, and I'm open to suggestions.The plan so far is...