The politics of polar bears and climate change is getting interesting. They are undoubtedly the 'poster bears' of the stop climate chaos campaign. But they are also the subject of political developments in the lead up to the UN Climate Change Convention meeting in Paris.

There are five countries with polar bears: Russia, Greenland, Norway, Canada and the United States. They are known as the 'Range States', and for decades they have been negotiating about what actions they need to take, individually and together, to protect our furry friends. The result was the 1973 Agreement on the Conservation of Polar Bears, and subsequent Circumpolar Action Plans, which are signed up to by all five countries. 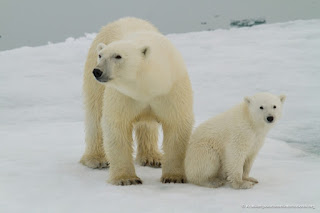 In 1973 the reason the range states got together was because polar bears were threatened by over-hunting. But as the years have gone by this has changed. Hunting is no longer out of control and the range states have now finally and formally recognised that climate change is the primary and overwhelming threat to the future of the bears, and with them, much of the rest of the polar ecosystem. They also recognise a range of other threats, namely: 'contaminants and pollution, human-caused mortality, shipping, resource and energy exploration and development, tourism and disease'. Crucially, they are committed to action to reduce those threats.

The range states met recently in Greenland and agreed their action plan, which states in no uncertain terms the need to tackle carbon emissions. The following is a quote from the meeting documents: 'The vision of the CAP is to secure the long-term persistence of polar bears in the wild that represent the genetic, behavioral, and ecological diversity of the species.  This vision cannot be achieved without adequate mitigation of greenhouse gas emissions by the global community.'

Polar bear scientists (see this report) seem to be optimistic that there has been a real change in direction by this political body. It is pretty momentous to see Canada and the United States signing up to a strong statement about the threat of climate change and the need to communicate and legislate to tackle greenhouse gas impacts. If this is an indication of the direction of travel of politicians in these countries, then perhaps we can be optimistic about seeing real results from the Climate Change conference in Paris later this month.

And meanwhile, it's Polar Bear week, so what better way to spend it than watching the Polar Bear Cam as the bears go out onto the newly forming ice in northern Canada? While you're at it, you can make your own climate change pledge and sign the polar bear petition. I have no idea if it'll help strengthen the political will to tackle carbon emissions, but it can't hurt.

(Thanks to KT Miller and Polar Bears International for use of the image).
Posted by cybercrofter No comments: