How Wild Can We Go? 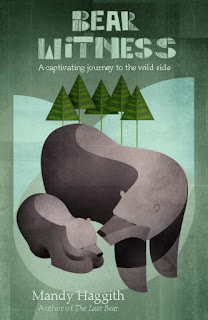 The launch of my new novel Bear Witness on Earth Day, 22 April 2013, is shaping up to be part of a memorable and exciting event.

How Wild Can We Go? will be a day devoted to envisioning the future of wildlife in Scotland. The launch of Bear Witness will be at 5pm, at Glencanisp Lodge, Lochinver, with readings, wine and a chance to buy a copy of the book, hot off the presses and signed by the author. Read what people are saying about the book here.

In the morning, there will be a children's event, playing with the kinds of fruit and nut bearing trees that bears like. This will involve the local forest school and the Coigach and Assynt Living Landscape project.

Prior to the book launch, from 1-4pm, there will be a guided walk to the Inchnadamph Bone Caves. Here we'll see the site where bones were found from several species now extinct in Scotland, including lynx and brown bear. This will give us all a chance to think about where we are coming from in terms of Scotland's wildlife past, and to look out at the landscape and reflect on the land's capacity at present.

Then we will return to Glencanisp Lodge, and start thinking into the future. After the book launch there will be a buffet dinner (a bargain at just £7.50) followed by a debate led by an august panel of speakers (tickets are £10, with a chance to win a free signed copy of Bear Witness, and you can buy them by paypal here).

The headline speakers will be Jim Crumley, author of The Last Wolf,  and Roy Dennis, Scotland's leading expert on reintroductions of various species, including the osprey, sea eagle and red kite. Joining them on the panel will be a representative of the Scottish Wildlife Trust, which is leading the beaver reintroduction in Argyll. There may be another special guest. I'll let you know as soon as we know...

The primrose proof of spring

Every year it's a different date. Last year it was February 19th. It has been as late as 23rd March. One freaky year it was late December. This year it's today, the first primrose, and the official start of spring on the croft.

Winter is over, so we have migrated to the caravan at the shore. It is a shock to be back to life at ambient temperatures after months in a well-insulated cabin with stove, but waking to the dawn light on the loch is the reward. As well as the move, other spring activity has begun: potatoes are chitting, the brussels sprouts seeds are sown, the onion sets are in the ground. I look at the list of winter jobs and think, well, next year...

Of course, we have been known to chicken out and return to our winter quarters. March often throws us some pretty ferocious weather, but even if it proves to be premature, it feels good to declare the winter season closed. It has been milder than usual, with fewer storms than we often get and we had a mind-blowing stretch of good weather in February which made it feel much shorter than it sometimes does. But it was long, nevertheless. The primroses are so welcome.

Help please! Do you know these poets?

Over the past year or so I have been gathering poems about the species in the Gaelic Tree Alphabet for an anthology, which will be published in the autumn by Saraband. It will be called Into the Forest - A Celtic Alphabet of Tree Poems. The whole process has been a delight so far, but I'm reaching the part of the process I was warned about by other anthologists: finding copyright holders to seek permission to reprint poems.

About 80% of the poems are either published in books by successful publishers, or I know or have been easily able to make contact with the poets. Without exception I have had lovely messages of support, encouragement and enthusiasm from the poets whose poems I have asked to use.

But now I've reached the last 20%, I have a list of poets who I don't know how to contact. Mostly I found their poems in magazines, now defunct, or in books whose publisher no longer exists. I've asked on Facebook for leads for them all. There are also poets I know to be dead, but don't know who holds their copyright.

So, I am appealing to the world, please, if you know how to contact any of these poets, or know who holds their copyright, please contact me (hag@worldforests.org) and let me know!

Any leads much appreciated.  Thank you!
Posted by cybercrofter No comments: