The Power of the Wind

The power is out in Lochinver, so thanks to the wonders of off-grid living, ours might be the only household around here on the internet this morning (or maybe there's one other, hi Stevan and Helen!). Bill took the generator down last night once the wind began to look serious, and we've just put it back up again. In between, it blew a hoolie.

It was an eerie night. I didn't sleep much. The moon was just past full, giving the blanket of cloud a weird, white glow - floodlights on something unthinkable, in another part of the world.

The cabin vibrated and shuddered as gusts galloped in, battering us. I imagined the wind as a horde of wild, dancing creatures. The woods roared, birch trees bucking and cavorting like they wanted to uproot and follow the storm. The aspens on the crag strained and tossed their upper bodies around for release. And every now and then, one of the passing dancers would kick our cuboid little home as if to say, 'Oi, come out, you squares, we're having fun.'

They must have kicked a power line down somewhere in their frenzy. I hope everyone's coping without electricity. I can't help feeling a bit smug - elated with the energy of the wind and glad we're not dependent on the national grid to keep working. And the boat is safe.
Posted by cybercrofter No comments: 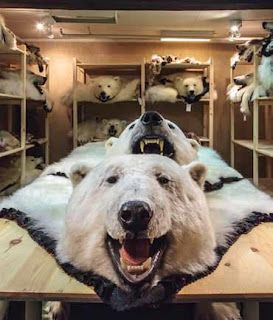 I have been devoted to polar bears all my life. They're beautiful and ferocious and that combination of attributes has always appealed to me.

For most of my life I believed that it was wrong to kill them. I knew they had been threatened by extinction from over-hunting and only recovered due to the protection measures of the 1973 Agreement on the Conservation of Polar Bears - and I always believed that Russia's strict implementation of this agreement, banning hunting altogether, was right, whereas other countries, like USA and Canada, which allowed some hunting, was wrong.

Then I went to the Russian Far East, and met indigenous people who have traditionally hunted polar bears, and I accepted that in fact they have the right to wear polar bear pants. I've written about this in an earlier blog post,  arguing that while traditional hunting is acceptable, killing polar bears for sport is not, and that the practice of trophy hunting should be stopped.

The petition I signed then was seeking to have polar bears' status upgraded under CITES, the Convention on International Trade in Endangered Species, from being listed under Appendix II to being listed under Appendix I, thus effectively banning trade in their body parts and bringing an end to trophy hunting. You can read more about the legal status of this change, and a rationale for why it should be done, here. The picture above comes from that report.

I still find the idea of killing bears (indeed any animals) for sport repugnant and barbaric. Yet, there are serious questions about whether the CITES change to restrict it is a good idea.

In a recent article in the international journal of Marine Policy, Douglas Clark, Chanda Meek and several other scientists from Canada and Alaska argue that the CITES listing upgrade would be counter-productive. They claim that it could cause an increase in the number of bears killed, because at the moment indigenous communities of the north are actively involved in co-management of the bears and have strong economic incentives to protect them, through the money they earn from the sale of hunting licences, but if the hunt and trophy trade is squeezed by CITES, their potential economic losses will reduce their willingness to co-operate in the co-management system.

This is therefore an argument that says that the indigenous people have economic rights to the proceeds of trophy hunting of bears. This goes way beyond the right to wear polar bear pants; it is no longer about the right to continue their traditional culture. Does the fact that in Canada and Alaska, the trophy hunting system has a high value, really give the people who currently benefit economically from that system a right to continue it? I am uncomfortable with that. I don't agree that the fact that they currently profit from trophy hunting gives them a moral right to do so.

Yet Clark et al argument is less moral than pragmatic. They point out that the economies of northern communities are already fragile, and the change in CITES will most likely be perceived by them as harmful to them. The policy will thus undermine the processes of co-management between all the different people with an interest in polar bears and in particular, it will set back progress that has been made in building trust between conservationists and indigenous peoples.

I have stacks of questions at this point. Are there economic compensation arrangements that could be put in place to make up for economic losses from trade in polar bear parts? How polarised are the players in the co-management system and how fragile is that system? Surely if co-management is working, a change in the rules can be negotiated between the government and local communities that does not require the latter to carry the burden of a change in the CITES listing. I remain to be convinced of this part of the argument.

However, much more fundamentally, and more convincingly, Clark et al argue that the main threat to both polar bears and the ways of life of northern indigenous peoples is climate change and thus changing the CITES listing is a 'fig-leaf policy', merely fiddling while the arctic goes into melt-down. Supporting the CITES change allows politicians like David Cameron to look like they are doing something to protect polar bears when in fact they are ignoring the real problem. Therefore politicians of the northern nations should be focusing their efforts on changing policies that affect carbon emissions and those of us interested in polar bear conservation (and indigenous peoples rights) should be putting our energies into lobbying for action to address climate change.

If you agree with me that this second argument is sound, you might like to support this petition calling for a stronger lead to be taken by the USA on climate change, for the sake of polar bears, and polar people.

Meanwhile, I will continue to mull over the ethics and economics of hunting.
Posted by cybercrofter No comments: