To Mandy From Mandy


Sometimes you read something, and don't know whether to laugh or cry. Today is one of those times - the other Mandy is in bed with the nastiest paper company in the world.


In a recent interview with Pulp and Paper International, that well-known organ of the pulp industry, Peter Mandelson, aka The Prince of Darkness, aka 'Mandy', explains that he has been hired by Asia Pulp and Paper as a consultant, gushing that 'it is more than an opportunity, it is a privilege to help a company like APP'.


Peter Mandelson, you will remember, is a master of spin. As Tony Blair's right-hand-man he turned the UK's Labour Party from a socialist party into a bastion of capitalism, steering us directly into the economic and moral shambles that we'll no doubt remain in for years to come. A master of spin and double-speak, he massaged the left wing of British politics so far into the centre ground that it became indistinguishable from Thatcherism.


And now, he has the 'privilege' of working for APP - Asia Pulp and Paper - and his job is presumably to carry out a similar act of legerdemain. There isn't a paper company on the planet with a worse reputation for forest destruction and trampling the rights of local communities than APP. They are responsible for massive deforestation in Indonesia, taking over vast tracts of land without the local indigenous people's consent, razing forest to the ground and replacing it with monoculture plantations of alien species, like acacia. When I visited Indonesia to research my book, Paper Trails: from trees to trash, the true cost of paper, I was steered away from close investigation of APP because their security forces were deemed too dangerous. If you're interested, you can read about it in chapter 5.

This is a bad company, and now they're being promoted by one of Europe's most powerful men. After playing his part in various scandals in the UK, Peter Mandelson became Trade Commissioner for the EU, and it is this role that is useful to APP. The company has a track record of reneging on debt and using wood of at best 'questionable legality' (see a recent letter to European export credit agencies for more details). Next year, the European Union will bring in strict new rules banning the import of wood and paper products that come from illegal timber. Peter Mandelson's job is to work out how APP can flaunt, or get around, these rules.


What bugs me most about Peter Mandelson's skin-creepy interview in PPI is how he scoffs at the environmental and human rights organisations that have been campaigning tirelessly for years to try to limit the damage being wreaked by APP on Indonesia's forests and forest people. He sanctimoniously urges NGOs 'to stop dwelling on the past and start focussing fully on the future'. But a recent report from Eyes on the Forest, a coalition of Indonesian organisations, shows that APP's promises for the future have no substance whatsoever.


What Peter Mandelson is ignoring is that the environmental and human rights community has been talking about the future for years. The future of the forests and their people is what gets us out of bed in the morning. Back in 2006, a huge consensus about what we want the future to look like was achieved, and more than 50 organisations in Europe signed up to a Vision for Transforming the Pulp and Paper Industry. There's an even bigger network signed up to a similar vision in North America. We've been focussing on the future for years, while all APP has been focussed on is trashing the rainforest and telling lies.


Peter Mandelson needs to wake up to the reality of the present - the people who are struggling today to make their livelihood because they have lost their land under a pulp plantation, the carbon emissions from the deep peat soils laid bare by APP's logging machinery, the tigers and orang-utans whose dwindling rainforest habitat is being cut down as you read this. Of course we shouldn't believe a word of APP's so-called 'Sustainability Roadmap', and the reason is neither because of the past nor the future, it's because of what is happening to the Indonesian forests to supply APP's pulp mills right this minute. 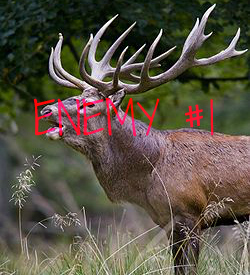 I am a vegetarian, sandal-wearing peacenik, but I tell you, it's enough to set me to sharpening a spear. Bring back the bears and wolves, that's what I say.
Posted by cybercrofter No comments: