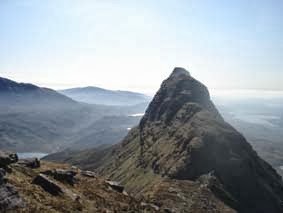 On Saturday 5th October, as part of the Assynt Festival, and the Year of Natural Scotland 2013, I'll be doing a rock writing event. A what? An exploration of rocks and how they've shaped our landscape, from a literary point of view - part writing workshop and part performance.

The plan for the day is to start with a 'Rock Book'. This will be a collection of some of the wonderful words about our landscape that have already been laid down, for example in Norman MacCaig's poetry, by geologists, and by local writers, as the raw material to inspire new rock writing.

From 1pm, we will use the Rock Book as inspiration, to be crushed and reformed, eroded and replaced by newly sedimented words, with intrusions of other existing writing brought along by participants squeezed among the strata, exploring all the geological metaphors we can in the time!

The result will be a metamorphosed set of rock writing strata, which will be performed on Knockan Crag at 3.30pm.

In between there'll be light refreshments, and there'll be a marquee in case the weather is typical for an Assynt October day, but you'd be best bringing clothing suitable for outdoors.

Come! It's going to be a unique Geopoetic event!

Everyone welcome to come along and take part by writing, reading or just listening.

More information on www.assyntfestival.org.uk
Posted by cybercrofter No comments: 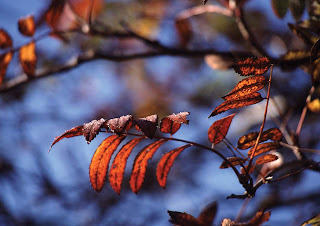 Until 3 December 2013, the Forestry Commission is running a consultation about whether Scotland should have a national tree, and if so, what it should be. I was very flattered to be asked to be the 'champion' of the rowan tree when the consultation was launched at the Edinburgh Botanical Gardens earlier this month. Someone there must have noticed how much I love this beautiful species!

There are many myths and stories involving rowan trees. My favourite is a Greek myth. It tells of the top god Zeus, who discovered that his sacred nectar cup had been stolen by demons and sent eagles in pursuit. Although they rescued the magic cup, they were fatally injured in the process. As they fell to earth, Zeus turned their feathers into the pinnate leaves of rowan trees, their bones into wood and their blood into bright red berries. (These berries make a ruby-red jelly that rivals marmalade on toast for breakfast - the recipe is in the Handbook of Scottish Wild Harvests - and now is jelly time!)

In the Celtic tradition, rowan is the symbol of Brigid, goddess of poetry, music and the arts. It therefore seems fitting to offer a wee poem for this bonniest of Scotland's trees.

The rowan grows tall
passed over by all
storms
it forms
here in the open wilds
the perfection of a child's
painting of a tree
untested by tragedy.

In the anthology of tree poems I'm editing (Into the Forest, due out in November from Saraband) there are lots of gorgeous poems about rowans, including Hopkins' cracker Inversnaid, with its reference to the 'beadbonny ash', one of the tree's nicknames. Its leaves are ash-like, so it is often called the mountain ash, and the Vikings believed men were made from ash trees, and woman from rowans.

There is no more magical tree than rowan. Its flowers have the magic number of five petals and sepals, and its blood-red berries bear the mystical pentogram. Witches make their wands from rowan twigs. In rural areas throughout Scotland, you still see rowan trees planted close to houses, because of the belief they will keep evil spirits away. The cross-beams of chimneys are called ‘rantrees’ in Scots because they were often made of rowan wood, to stop ghosts and ghoulies coming down the chimney. Twigs over doors, in stables and byres, tied into the tails and manes of livestock or attached to masts and halyards on boats, are all supposed to bring health and good fortune.

So cast a spell with a rowan stick, and cast your vote for it to be Scotland's national tree!