I'm reading Sara Maitland's Gossip from the Forest. On page 106, she notes the following changes in the 2008 new edition of the Oxford Junior Dictionary.

My reaction is visceral and furious. Who could possibly take 'acorn' out of a children's dictionary? Are conkers really no longer part of the necessary vocabulary of every British child? How will future generations get through the winters without the words for holly, ivy and mistletoe?
Posted by cybercrofter 1 comment:

By leaves we live

During July I will be poet in residence in the Edinburgh Botanical Gardens as part of the Walking with Poets project. I'll be blogging regularly while I'm there, and the first taste of that is now on the project page, here: https://walkingwithpoets.wordpress.com/
Posted by cybercrofter No comments: 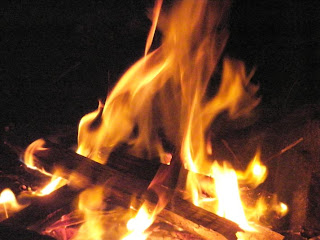 We had our Beltane fire a day late. The night itself, 30 April, was poor weather, I was out for most of the evening and had work to do the next morning, so we delayed. Call me a fair-weather pagan, but everything conspired to make last night feel right. As we finished eating, an otter came by, dipping and cruising along the bladderwrack fringe of the shore. Two bats performed invisible calligraphy on the sky, spelling out a mystery. It was a calm, clear evening.

The recent northerly wind had cleared all the seaweed off the rock where we always have fires and the circle of stones always manages to withstand the spring tides. We took a bottle of wine down there and set to.

The makings of a fire are inauspicious: a scrumple of waste paper and a heap of scrap, bits of broken pallets that have spent a few years as steps or fencing until they're too rotten for that, old planks and offcuts and a few chunks of driftwood. I made a tower of little bits and set it alight, then as the flames started licking I laid some bigger sticks into a spider shape and let it weave its web of mesmerism.

All the scraps unify into a single thing - the fire is singular. The pieces of wood line up, like a narrative adventure, one by one, building to a blazing climax. The wood that seemed to be rubbish comes back to life. Flames seem to remember the movement of leaves, the shimmying dance of wind through a woodland canopy, and all of the colours and warmth of sunshine.

A fire is magic. I know nothing so completely absorbing. I can't remember what we thought or said while the fire burnt.

Eventually, after the last pieces of wood found their place and burned, the last flame flickered out, and the fire-web released us to go to sleep. The embers (plural again now) glowed on through the night, cooling.

This morning we woke to the first cuckoo. Its two-tone song seemed to follow the fire, as two follows one. Suddenly everything has coupled up, and everywhere I look there are pairs of leaves opening, pairs of legs, lips and beaks. Soon we'll be awash with the froth of blossoms and clusters of berries and the world will be myriad and many and too numerous to count, until the autumn.

Then, with another fire, we'll welcome the big zero of winter, out of which this miraculous May has sprung.
Posted by cybercrofter 1 comment: