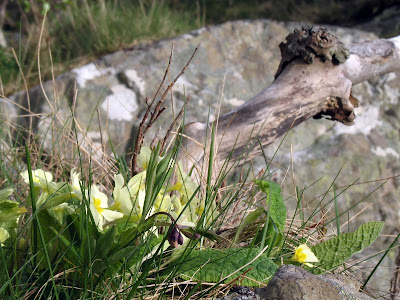 It's now, officially, spring on Braighlinne. The first flower to open is a primrose, as always. And as always it is under the slowest trees to come into leaf, aspens, down close to the shore of Loch Roe in the cove we call Kelvin Grove, because of the Kelvin engine from a long abandoned fishing boat which squats there, below the high tide mark.

behind this old shore dyke,

sheltered by this aspen grove,

As if they have seen the primroses too, blackbirds have begun to sing their glorious improvisatory songs. Late in the afternoon, I stand transfixed by a high-wire performance: the bird sits in beak-lifted sillhouette, its back to the sunset, facing the moon in the eastern sky, and pours out one witty trickle of tune after another. Its tone is to a flute as primrose yellow is to gold. I wonder if its dowdy partner, hiding in the birches, is as impressed by its song as I am?
Posted by cybercrofter