I have spent the past week on retreat at the wonderful Moniack Mhor writing centre, working on my Iron Age novel. It is in three parts. The middle part centres on Pytheas ‘the Greek’, and I decided to focus on him for the week. I am getting used to imagining how life was several hundred years BC but for this last week I’ve had the added challenge of pretending to be a man.

He is a fascinating character and the more I learn and reflect, the more astonishing his journey seems. His home was Massalia (modern day Marseilles), which was at the western end of the Greek empire (hence his moniker, ‘the Greek’). He travelled from there to the Bay of Biscay (possibly around Spain or maybe down the Garonne River), then up the French coastline to the island of Alba (Britain). He clearly also went significantly further north, probably to Iceland and as far east as the Danish coastline. Here's a map (from here) that suggests his route. 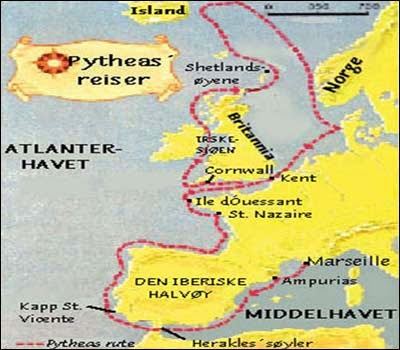 He must have been an intrepid and hardy guy. I guess he was driven by insatiable curiosity and I like to imagine he was charismatic, as many great explorers need to be in order to inspire strangers to help them and to talk themselves out of difficulties. What were his faults, I wonder? Was he bossy? Did he snore? We can never know what he believed or how he thought, but from the fragments of his book, On the Ocean, we know he was a highly methodical scientist, and kept good records.

Pytheas is credited with being the first person from the Mediterranean to circumnavigate Alba and thereby confirm that it is a big island. He even estimated the length of the coastline, to an extraordinary level of accuracy. He treated it as a big triangle with the point in the north, and reckoned that the western seaboard was 20,000 stadia long, the eastern coast was 15,000 stadia and the south coast was 7,500, a total of 42,500 stadia. A stadium is 184 metres, so this works out as 7820 km. The actual length is about 7580, so he’s only 3% out. Not bad for someone travelling without the benefit of GPS!

How on earth did he manage this impressive estimate? We don’t really know. It could be that he kept excellent records of sailing times and had a reasonable sense of speed achieved. It could well be that he tapped into local knowledge of port-to-port distances and tallied them up. We don’t have any contemporary records of how the people of this island made such measurements but the skippers of trading ships plying the coastline would have had a good idea of the distances involved.

I love the idea of Pytheas getting out his quill and ink block and scratching down a record of the distances he was travelling, along with his sun declination measurements and notes about the tides and currents. I wonder what other observations were in his log. Did he scribble about the weather? Did birds and wildlife or people get recorded? Did he ever jot down a poem in the margin?
Posted by cybercrofter