There's a patch of ground at the top of the croft which belongs to me, and on it a proper house was planned. For a while. As part of the plan, an access track was put in, and while the digger was there it was supposed to dig some test holes to check where the bedrock was for the structural engineer. It dug and dug, finding only a seam of fracturing rock, until I cried about the devastation and called a halt. The result is a big hole, which is now a pond, and the house plan on indefinite hold. Since then, recession and caution on the part of mortgage lenders means that it's unlikely I could ever get the finance together to build, and anyway, who needs a house when you've got a caravan on the shore, several sheds, and a turret?

The turret is actually a B&Q potting shed, at the top of a wooded crag, with a stunning view of the mountains and the sea. It's my private writing place. It used to have a wood-burning stove in it, but the chimney leaked and the stove was rubbish, so I've ripped it out. It's in an implausibly exposed position, but it's tied down to its foundations with lorry straps but even so part of the roofing came off in a recent storm. It's repaired again now, and dry once more. 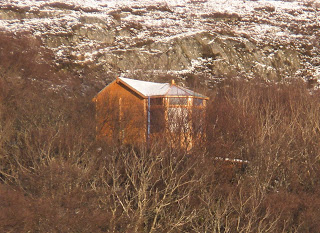 I always loved Rapunzel. Now I too can let down my hair.
Posted by cybercrofter