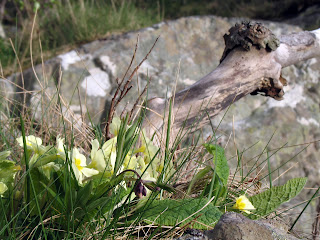 Spring is declared here at the first primrose in flower on the croft, and that was yesterday morning. We actually spotted one in the woods on the south side of the loch a fortnight ago, but that doesn't count. It has to be on the croft for spring to be officially here.

The potatoes are now chitting, the onion sets are in, and various seeds are sown. Fantastic. It'll no doubt be a slow motion towards the cherry blossom and the arrival of cuckoos and warblers, and we'll no doubt have plenty of snow, sleet, hail and frost yet, but the hazel catkins are yellow already and the grass is growing fast.

Compared to the last couple of years it's an early first primrose, but there have been two even earlier in February in the past 12 years, not forgetting one completely anomalous year when we spotted one out on 28 December.

Particularly exciting yesterday was the emergence of some bees from the hive, looking pretty groggy, just doing feeble little flights, then bumbling around by the entrance. But I like to think they looked as if  they were pleased to be getting some fresh air. It's not warm enough to open up and see how they're getting on, but signs of life at all are most gratifying.

I was intrigued recently to discover that contrary to what you might expect, a really cold winter is not as hard on bees as a mild one like this one has been.When it's really cold they huddle together completely dormant and eat very little so their stores last well. During a mild winter they're less dormant, therefore need more food and there's also more condensation and that increases the risk of disease.

Willow pollen and nectar will make all the difference to the bees in the next difficult month. So you'll find me chanting under the willows, urging their catkins on.
Posted by cybercrofter