Highlight of the year - bees

Two years ago, my bee colony died. I decided not to try to get another colony, as even experienced beekeepers seemed to be having such a hard time of it, so the hive was in bits in the shed until this august, when I arrived back after a summer away to find the shed filled with bees, fervently interested in the old frames. My brother's family were just about to visit, and the shed is the venue for the compost toilet for my nieces' temporary accommodation in a caravan. I didn't think they'd be too amused by a toilet full of bees! 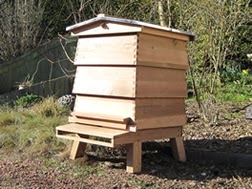 So I shifted all the bits of hive outside, in approximately standard beehive order, and the bees were most impressed and settled straight in. I discovered later that a neighbour had smoked a swarm out of her chimney. These were presumably those bees, getting desperate for a place to stay.

The bees have flourished since as we had a nice autumn with lots of heather. I fed them well and had them tested for varroa mites, and they have none! I have rejoined the Scottish Beekeepers' Association.

It feels like a blessing to be asked, and be able, to give shelter to a new queen and her colony. Given a year of stories of bee disease, the struggle against insecticides and unexplained colony collapses, I seem to be the only person in Scotland with a completely untainted good news bee story. Perhaps there's hope!

Have a very happy honey-sweetened feasting season.
Posted by cybercrofter