How poor were the people here before the clearances?

I was on the telly yesterday (on BBC Alba, speaking English on the Gaelic news, at 13.30 minutes through the programme here). I am talking about the surprise of discovering fine pottery and wine bottles and other 'high status' objects in the dig of a 200 year old house here in Assynt.

There's a stereotype that the people who were cleared from the glens in the Highland Clearances were destitute, poverty-stricken folk who went off to find a better life in distant lands. But perhaps there's more truth in other stories, about good lives brought to an abrupt end by landlords who simply wanted to use the lands exclusively for their own ends.

The people who lived in the Glenleraig house we recently excavated seem to have had disposable income - cash to spend on luxuries like fine china, good boots and wine. The archaeologists are surprised by the wealth of the finds. Perhaps these people weren't being 'helped out of their poverty' by being made to leave their homes.

Today I spent the afternoon at Ledbeg exploring a stone that someone tripped over a few weeks ago, which was thought perhaps to be a fallen neolithic standing stone. Today a bunch of us dug back the turf to see what it looks like. It's much bigger than we expected: 3 metres long, deeper than it is wide and, to my mind, looking like a huge goddess statue. I wonder what the archaeologists will make of this? 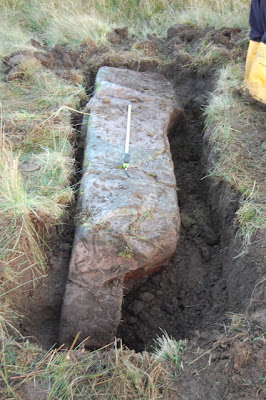